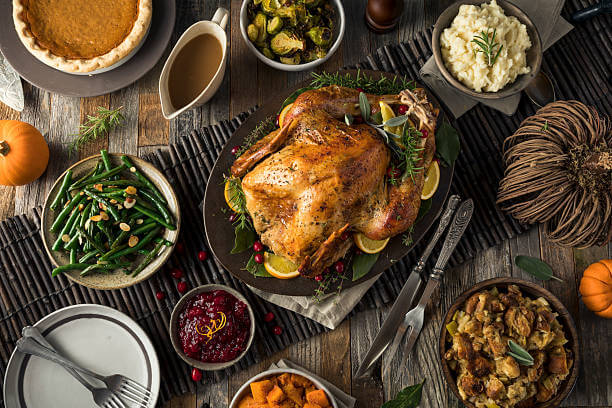 The holiday season can be a difficult time. Between family drama and disappointing gifts, you might find yourself looking for something to cheer you up. That’s where turkey comes in. Turkey is widely eaten in different cultures and countries around the world. Around the world, we see that cooking turkey with family—especially during festive periods—is not just fun, but builds bonds between family members. In this blog post, we will share everything you need to know about turkey, including sharing some delicious and fun recipes to spice up your and your family's cooking. 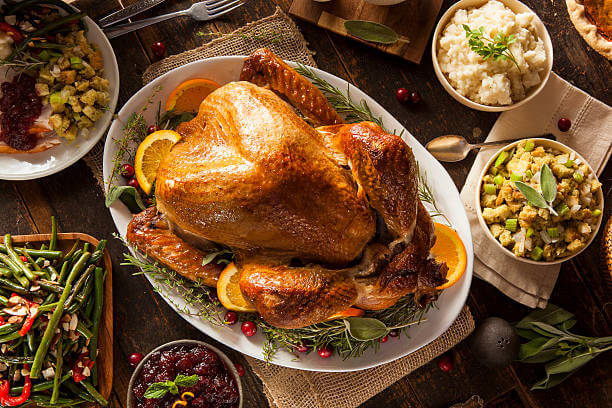 Turkey is a compound food, and it is considered to be highly nutritious because it offers some degree of nutrition, as it is higher than any other meat—red meat especially—in protein and Omega-3 and lower in saturated fat than pork and bacon. Turkey meat can be suitable for several cooking dishes, and most of the time it is prepared without any hassle.

After doing some digging, here are some things we found out about Turkey that we feel you should know about. Before we get right into it if you are looking for a reputable online grocery store where you can shop for your turkey or other grocery items, check here.

Turkey is the meat of both domesticated turkeys and wild turkeys. This type of meat has been around for a long time and is especially popular in North America. It is traditionally eaten as part of important cultural events such as Christmas and Easter, and as a regular dish. Turkey is a leaner meat than chicken and beef and is an excellent source of protein.

The flavour and tender texture of a turkey are not dependent on gender, but on the age of the turkey when it is purchased at the market. The youngest turkey has the softest meat. The turkeys used for roasting are usually 4-9 months old and weigh 8-24 pounds.

Turkey has long been eaten by indigenous peoples of Mexico, Central America, and the southern United States.

Traditionally, turkey is often eaten as a main dish for Thanksgiving dinner celebrations in the United States and Canada, and as a stuffed turkey for Christmas dinner celebrations in many other parts of the world. Turkey was eaten in England as early as the 16th century. Prior to the 20th century, pork ribs were the most common holiday food in North America, when animals were usually slaughtered in November.

Once, Turkey in the wild was very abundant and was eaten all year round, the meal was quite easy to get, but pork ribs were rarely available except during Thanksgiving's New Year season. As the Christmas turkey tradition spread throughout Britain in the 17th century, it became common to serve geese among the working class. Goose remained the main roast until the Victorian era. In Mexico, Turkey alongside moles is considered a local cuisine.

Turkey is lean meat and is a good choice for anyone who wants to reduce their fat intake because it is rich in protein and has less fat and more protein than chicken. It is an excellent source of vitamins B and minerals; all of which help to support heart health.

For 0.5lbs of boneless—deboned—turkey, the nutritional value is:

How is Turkey Made?

Turkey used in cooking can be fresh and frozen. Like most foods, fresh turkey is generally preferred, but they are more expensive. Before and after holidays, it is often difficult to buy without a pre-order due to the high demand for fresh turkey. For frozen breeds, thawing is a major task for large turkeys that are normally used for consumption. Normal size turkeys take several days to thaw properly.

Turkeys are typically baked or roasted in an oven for several hours, regularly even as the rest of the meal is being prepared. Sometimes, a turkey is brined earlier than roasting to beautify flavour and moisture content. Completely cooking the darkish meat has a tendency to dry out the breast. Brining makes it viable to completely prepare the darkish meat properly without drying the breast meat.

In some parts of the US, especially in the southern United States, you can also fry in hot oil, mostly groundnut oil, in a turkey fryer for 30-45 minutes. 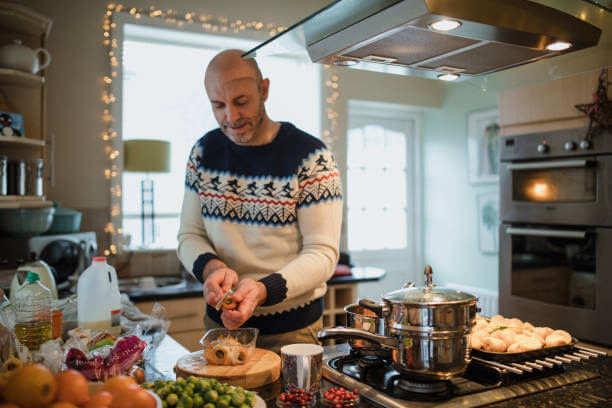 How to Prepare a Good Turkey

For health and reference purposes, let’s do Herb Roasted Turkey. Now, herb-roasted turkey is a tasty and healthy way to roast your turkey. In this method, you season your turkey with fresh herbs before cooking and watch how you'll be treated to a moist and flavorful dinner that your family are sure to love.

When you're ready to coat the turkey, add chopped herbs (rosemary and thyme), salt, ground black pepper, crushed ginger and garlic, and butter in a food processor and mix well. When mixing is complete, coat all inches of turkey so that all parts of the turkey are properly seasoned. 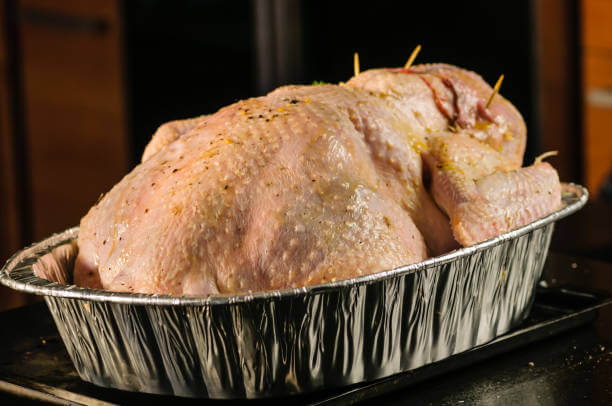 After buttering the turkey, put it in an ultra-high temperature oven to roast it. This step will give you that amazing deep golden skin. Next, lower the temperature and cook the turkey.

After a while, cover the turkey with foil to prevent it from being quickly browned and cooked. Return to the oven, but check the internal temperature of the turkey seasonally with a thermometer. The minimum temperature should be 165 degrees Fahrenheit. To see the proper temperature for a turkey, attach a thermometer to the thickest part of its chest and thighs.

When you are satisfied that the turkey is completely cooked, take it out and put it out.

You can choose to leave it in its entirety. Add fresh fruits such as apples, grapes, oranges, lemons and limes, as well as a variety of fresh herbs to the outer edge of the platter. Putting all the natural elements around the turkey makes it look really nice and is the perfect spotlight for your lovely Thanksgiving dinner. 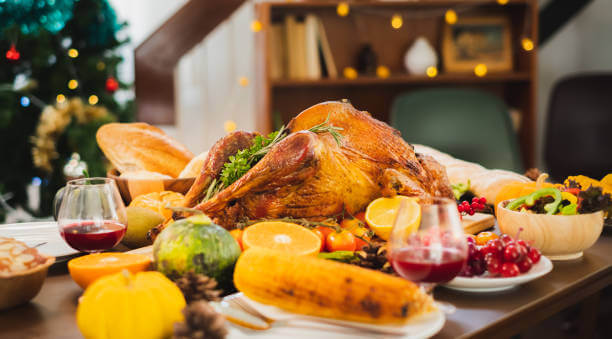 Risks of Eating Turkey Too Much

Turkey is very nutritious and eating too much at once is not a big problem. However, gas, bloating, and indigestion can occur. Like all meat, turkey does not contain fibre. This low-nutrient diet can lead to diarrhoea and constipation, among other things. Fibre helps balance movement time by moving the contents along the gastrointestinal tract. It also absorbs water, which softens the stool and makes it easier to pass through the digestive tract.

Eating too much turkey can cause heartburn. It also stimulates the release of inflammatory cytokines that can impair brain function and cause drowsiness. Turkey itself has too little tryptophan to make you drowsy, so eating too much can increase the drowsiness 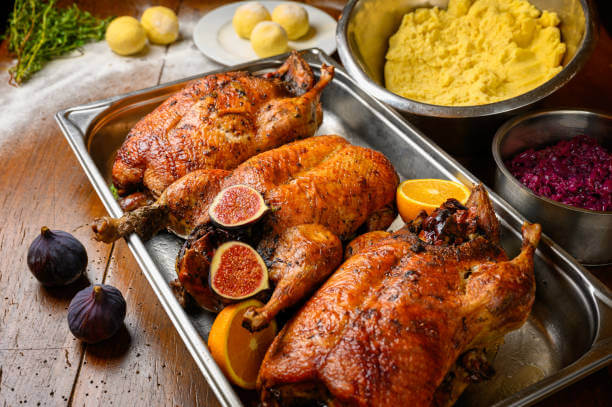 Fresh, frozen, whole and cut turkey can be found easily at your local markets and supermarkets. They can also be found at online stores.

If you are looking for a reputable online store that sells quality turkey, ingredients to prepare it, and a variety of other grocery and household items, and can deliver to your doorstep in the UK, then you are in the right place.

Check us out at niyis.co.uk. We offer amazing ingredients to fit every one of your various recipes. Get your turkey wings or drumsticks, and other ingredients to prepare your favourite turkey dish.